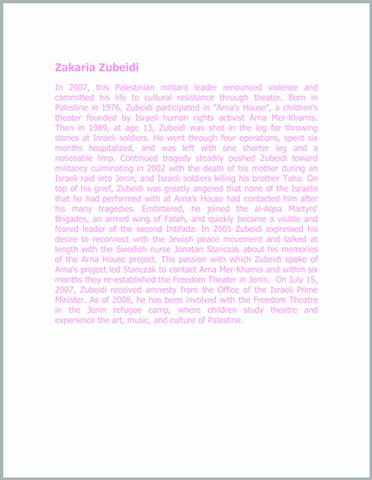 (text) In 2007, this Palestinian militant leader renounced violence and committed his life to cultural resistance through theater. Born in Palestine in 1976, Zubeidi participated in "Arna's House", a children's theater founded by Israeli human rights activist Arna Mer-Khamis. Then in 1989, at age 13, Zubeidi was shot in the leg for throwing stones at Israeli soldiers. He went through four operations, spent six months hospitalized, and was left with one shorter leg and a noticeable limp. Continued tragedy steadily pushed Zubeidi toward militancy culminating in 2002 with the death of his mother during an Israeli raid into Jenin, and Israeli soldiers killing his brother Taha. On top of his grief, Zubeidi was greatly angered that none of the Israelis that he had performed with at Arna’s House had contacted him after his many tragedies. Embittered, he joined the al-Aqsa Martyrs' Brigades, an armed wing of Fatah, and quickly became a visible and feared leader of the second Intifada. In 2005 Zubeidi expressed his desire to reconnect with the Jewish peace movement and talked at length with the Swedish nurse Jonatan Stanczak about his memories of the Arna House project. The passion with which Zubeidi spoke of Arna's project led Stanczak to contact Arna Mer-Khamis and within six months they re-established the Freedom Theater in Jenin. On July 15, 2007, Zubeidi received amnesty from the Office of the Israeli Prime Minister. As of 2008, he has been involved with the Freedom Theatre in the Jenin refugee camp, where children study theatre and experience the art, music, and culture of Palestine.