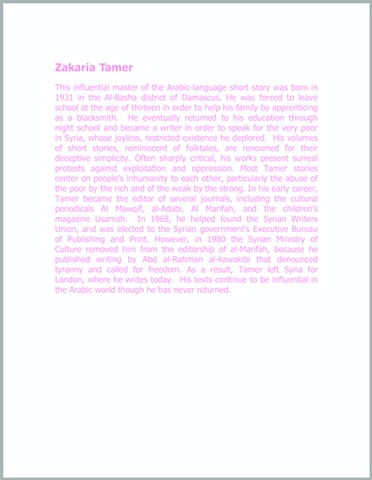 (text) This influential master of the Arabic-language short story was born in 1931 in the Al-Basha district of Damascus. He was forced to leave school at the age of thirteen in order to help his family by apprenticing as a blacksmith. He eventually returned to his education through night school and became a writer in order to speak for the very poor in Syria, whose joyless, restricted existence he deplored. His volumes of short stories, reminiscent of folktales, are renowned for their deceptive simplicity. Often sharply critical, his works present surreal protests against exploitation and oppression. Most Tamer stories center on people’s inhumanity to each other, particularly the abuse of the poor by the rich and of the weak by the strong. In his early career, Tamer became the editor of several journals, including the cultural periodicals Al Mawqif, al-Adabi, Al Marifah, and the children’s magazine Usamah. In 1968, he helped found the Syrian Writers Union, and was elected to the Syrian government’s Executive Bureau of Publishing and Print. However, in 1980 the Syrian Ministry of Culture removed him from the editorship of al-Marifah, because he published writing by Abd al-Rahman al-kawakibi that denounced tyranny and called for freedom. As a result, Tamer left Syria for London, where he writes today. His texts continue to be influential in the Arabic world though he has never returned.