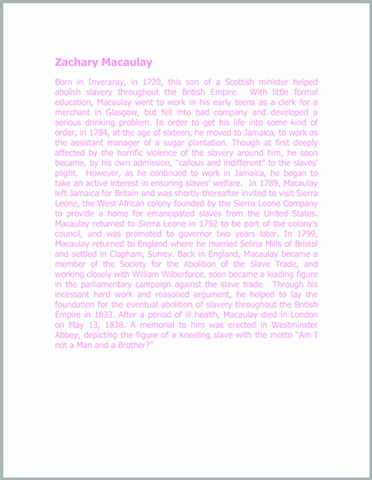 (text) Born in Inveraray, in 1720, this son of a Scottish minister helped abolish slavery throughout the British Empire. With little formal education, Macaulay went to work in his early teens as a clerk for a merchant in Glasgow, but fell into bad company and developed a serious drinking problem. In order to get his life into some kind of order, in 1784, at the age of sixteen, he moved to Jamaica, to work as the assistant manager of a sugar plantation. Though at first deeply affected by the horrific violence of the slavery around him, he soon became, by his own admission, “callous and indifferent” to the slaves’ plight. However, as he continued to work in Jamaica, he began to take an active interest in ensuring slaves’ welfare. In 1789, Macaulay left Jamaica for Britain and was shortly thereafter invited to visit Sierra Leone, the West African colony founded by the Sierra Leone Company to provide a home for emancipated slaves from the United States. Macaulay returned to Sierra Leone in 1792 to be part of the colony’s council, and was promoted to governor two years later. In 1799, Macaulay returned to England where he married Selina Mills of Bristol and settled in Clapham, Surrey. Back in England, Macaulay became a member of the Society for the Abolition of the Slave Trade, and working closely with William Wilberforce, soon became a leading figure in the parliamentary campaign against the slave trade. Through his incessant hard work and reasoned argument, he helped to lay the foundation for the eventual abolition of slavery throughout the British Empire in 1833. After a period of ill health, Macaulay died in London on May 13, 1838. A memorial to him was erected in Westminster Abbey, depicting the figure of a kneeling slave with the motto “Am I not a Man and a Brother?”