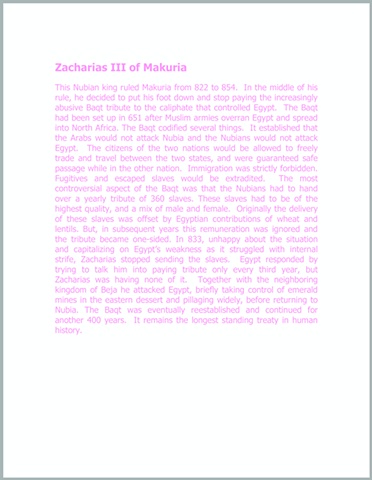 Zacharias III of Makuria
< previous next >

(text) This Nubian king ruled Makuria from 822 to 854. In the middle of his rule, he decided to put his foot down and stop paying the increasingly abusive Baqt tribute to the caliphate that controlled Egypt. The Baqt had been set up in 651 after Muslim armies overran Egypt and spread into North Africa. The Baqt codified several things. It established that the Arabs would not attack Nubia and the Nubians would not attack Egypt. The citizens of the two nations would be allowed to freely trade and travel between the two states, and were guaranteed safe passage while in the other nation. Immigration was strictly forbidden. Fugitives and escaped slaves would be extradited. The most controversial aspect of the Baqt was that the Nubians had to hand over a yearly tribute of 360 slaves. These slaves had to be of the highest quality, and a mix of male and female. Originally the delivery of these slaves was offset by Egyptian contributions of wheat and lentils. But, in subsequent years this remuneration was ignored and the tribute became one-sided. In 833, unhappy about the situation and capitalizing on Egypt’s weakness as it struggled with internal strife, Zacharias stopped sending the slaves. Egypt responded by trying to talk him into paying tribute only every third year, but Zacharias was having none of it. Together with the neighboring kingdom of Beja he attacked Egypt, briefly taking control of emerald mines in the eastern dessert and pillaging widely, before returning to Nubia. The Baqt was eventually reestablished and continued for another 400 years. It remains the longest standing treaty in human history.