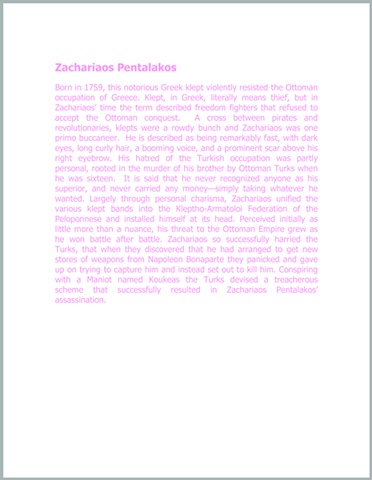 (text) Born in 1759, this notorious Greek klept violently resisted the Ottoman occupation of Greece. Klept, in Greek, literally means thief, but in Zachariaos’ time the term described freedom fighters that refused to accept the Ottoman conquest. A cross between pirates and revolutionaries, klepts were a rowdy bunch and Zachariaos was one primo buccaneer. He is described as being remarkably fast, with dark eyes, long curly hair, a booming voice, and a prominent scar above his right eyebrow. His hatred of the Turkish occupation was partly personal, rooted in the murder of his brother by Ottoman Turks when he was sixteen. It is said that he never recognized anyone as his superior, and never carried any money—simply taking whatever he wanted. Largely through personal charisma, Zachariaos unified the various klept bands into the Kleptho-Armatoloi Federation of the Peloponnese and installed himself at its head. Perceived initially as little more than a nuance, his threat to the Ottoman Empire grew as he won battle after battle. Zachariaos so successfully harried the Turks, that when they discovered that he had arranged to get new stores of weapons from Napoleon Bonaparte they panicked and gave up on trying to capture him and instead set out to kill him. Conspiring with a Maniot named Koukeas the Turks devised a treacherous scheme that successfully resulted in Zachariaos Pentalakos’ assassination.