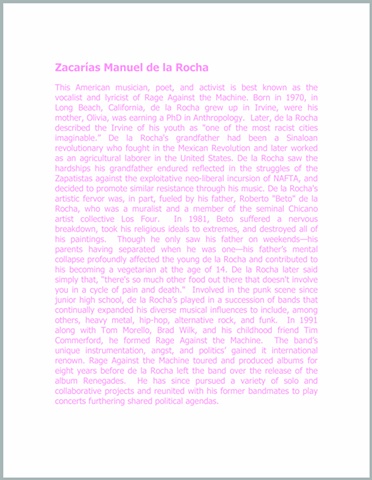 (text) This American musician, poet, and activist is best known as the vocalist and lyricist of Rage Against the Machine. Born in 1970, in Long Beach, California, de la Rocha grew up in Irvine, were his mother, Olivia, was earning a PhD in Anthropology. Later, de la Rocha described the Irvine of his youth as "one of the most racist cities imaginable.” De la Rocha's grandfather had been a Sinaloan revolutionary who fought in the Mexican Revolution and later worked as an agricultural laborer in the United States. De la Rocha saw the hardships his grandfather endured reflected in the struggles of the Zapatistas against the exploitative neo-liberal incursion of NAFTA, and decided to promote similar resistance through his music. De la Rocha's artistic fervor was, in part, fueled by his father, Roberto "Beto" de la Rocha, who was a muralist and a member of the seminal Chicano artist collective Los Four. In 1981, Beto suffered a nervous breakdown, took his religious ideals to extremes, and destroyed all of his paintings. Though he only saw his father on weekends—his parents having separated when he was one—his father’s mental collapse profoundly affected the young de la Rocha and contributed to his becoming a vegetarian at the age of 14. De la Rocha later said simply that, “there's so much other food out there that doesn't involve you in a cycle of pain and death." Involved in the punk scene since junior high school, de la Rocha’s played in a succession of bands that continually expanded his diverse musical influences to include, among others, heavy metal, hip-hop, alternative rock, and funk. In 1991 along with Tom Morello, Brad Wilk, and his childhood friend Tim Commerford, he formed Rage Against the Machine. The band’s unique instrumentation, angst, and politics’ gained it international renown. Rage Against the Machine toured and produced albums for eight years before de la Rocha left the band over the release of the album Renegades. He has since pursued a variety of solo and collaborative projects and reunited with his former bandmates to play concerts furthering shared political agendas.